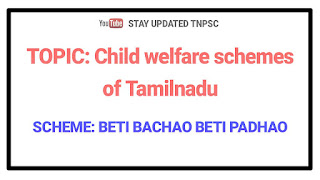 1. It was launched in Government of India in 2015.
2. 2011 census reveals that there is was alarming decline in Child Sex Ratio (CSR).
3. It was implemented to address the declaining Child Sex Ratio (CSR) in districts (National Average – 918/1000 live births).
Objective
1. To prevent gender biased sex selective elimination.
2. To provide survival and protection of the girl child.
3. To ensure education and participation of the girl child.
Implementation
1. In Tamilnadu, Cuddalore was the only disctrict selected for BBBP Scheme because it had CSR far below than National Average.
2. After implementation for three years, the CSR was improved from 886 to 956.
3. Cuddalore got National Award in 2017.
3. Then it was extended to 640 districts in India on 8th March 2018.
4. In Tamilnadu, Ariyalur, Dharmapuri, Namakkal, Salem, Perambalur, Villupuram, Thiruvannamalai, Thiruvallur, Tiruchirapalli and Chennai was joined along with Cuddalore.
5. In remaining districts of Tamilnadu, Government created awareness through mass media.
Initiatives
1. State government develops guide book on BBBP in local languages.
2. Information, Education and Communication (IEC) Materials are used to monitor the progress.
3. In District level, district teams are created
– celebrate birth of every girl with appreciation letter
– provide health kit to mothers
– people participatory programmes like rallies, human    chains, marathons and signature campaigns
4. Due to this, the CSR increased from 917 (2014-25) to 943 (2017-18).
5. Budget Allocation : ₹550.00 lakh in 2019-20.
Awards
1. BBBP National Award for the State 2019
– won by Tamilnadu as Best State
– Category: Overall Support Guidence
– Date: January 24th 2019
– Place: New Delhi
2.  BBBP National Award for the District 2019
– won by Tiruvannamalai district
– Category: Effective Community Engagement
3. Nari Shakti Puraskar Award 2018

How to Get our TNPSC Whatsapp Broadcast Messages?

Step 2: Whatsapp your Name and Place to above whatsapp no.

That’s all. You will receive a “Welcome Message/Confirmation Message” from us. Remember that, it may take a day to process all numbers. Hence you may receive the confirmation message within a day. Thank you for your patience.

GET TNPSC BOOKS AT LOW PRICE 😍

Open chat
1
Hii.. Are you will to join Our Group 2 Preliminary Test Batch? Surely you will like it 😇 TOTALLY 52 TOPIC WISE TESTS, 7 REVISION TEST, 3 FULL TESTS, NO BULKY PORTIONS WITH PERSONAL GUIDANCE.
EVERYTHING AT 699rs 😍😍