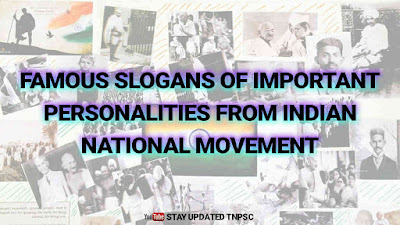 Indian National Movement plays an important role in all examination irrespective of any syllabus.

So every aspirants will try hard to master this topic.

In this Indian National Movement, the slogans of important personalities are very significant.

These slogans can be asked directly in exams.

Both in Pre Gandhian Era and Gandhian Era, some famous personalities have said some important quotes that will be useful for our preparation.

I have provided that in random manner.

In this video, I have given some famous slogans from Important Personalities. Each and every point in this video are important. Do watch this video till the end so that you will get good idea about this. Mainly useful for all Tnpsc group 1, group 2 and group 4 exam aspirants.