• The Niti Aayog has developed the SDG Urban index and dashboard in collaboration with GIZ and BMZ under the umbrella of Indo-German Development Cooperation.

• Out of 56 urban areas ranked in the index, 44 are with population of above one million, 12 are state capitals with a population of less than a million.

• While for some indicators, ‘urban area’ implies urban local bodies (ULBs), in other cases, it refers to all urban areas within a district collectively.

• As many as 56 urban local bodies have been ranked on 77 SDG indicators related to ending poverty, zero hunger, good health and well being, quality education, gender equality among others.

• The data on these indicators have been sourced from official data sources such as NFHS, NCRB, U-DISE, data portals of various ministries, and other government data sources.

• According to the government think tank, for each SDG, the urban areas are ranked on a scale of 0-100.

• If any urban area scores 100, then it means that the urban area has achieved the targets set for 2030.

• If any urban area scores 0, then it means that the Urban areas is the farthest from achieving the targets among the selected urban areas.

• The areas with ranking between 0 and 49 have been ranked as aspirants, those with 50-64 are termed as performers, 65-99 are called front-runners and the ones with perfect score are called achievers. However, not a single area has a perfect score. 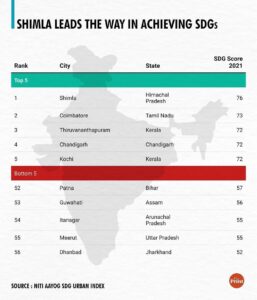 Best performers in other categories

• Of the 15 sustainable goals, the eighth is based on providing “Decent work and economic growth”. Bengaluru topped the list. The second best city in this ‘Decent Work & Economic Growth’ parameter is Chhattisgarh’s capital Raipur (64), followed by Uttarakhand’s capital Dehradun (59) and Goa’s capital Panaji (59) — but they were still in the performer’s category, far from achieving the goals.

• Kolkata scored just three out of 100 in providing “Decent jobs and Economic Growth”. This is the lowest score achieved by any city in the country.

• Coimbatore topped the no poverty parameter, followed by Shilong and Madurai.

• For good health and wellbeing, Shimla topped the list, followed by Amritsar and Panaji.

• Under the gender equality goal, Kochi and Thiruvananthapuram topped the list.